DUST DEVIL: IN THE CLAWS OF THE EVIL DEMIURGE 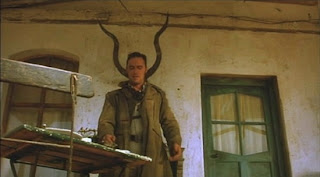 Richard Stanley's DUST DEVIL is burnt into the imagination of a devoted cult of followers as one of the most original and profound portraits of the demonological in the entire history of the flickering images.

His Devil is, and yet is not quite the Devil we're used to. He is, technically, a serial killer, but his methods and his motivation make him one of a kind. DUST DEVIL is, among other things, a horror film – but it is also so much more. 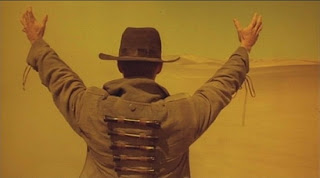 Stanley's Demon is in human guise, although he does not embody the usual moral: ''There's no Devil equal of Man''. Humanoid shape is, in this case, just a mask - a veil over a reality much deeper and older than mankind. The essential nature of the Dust Devil is numinous. Refreshingly divested of burdens of Christian dogma that weigh down so much of contemporary demonic cinema, Stanley's metaphysics is based on the ancient gnostic creed. His is a Devil beyond the usual concepts of Good and Evil. The key idea of the film comes straight from the gnostics, and is pronounced by the Dust Devil himself: ''There is no good or evil, only spirit and matter. Only movement toward the light - and away from it.'' 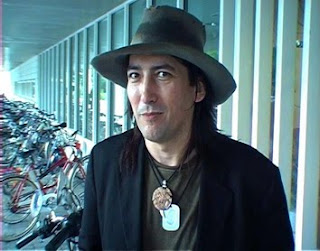 According to the gnostics, our world is a mistake, a failure. Material existence is a product of the Evil Demiurg, a malevolent deity. The real God is overthrown, powerless. It's hard to believe that a good God had anything to do with this world. Christian Church had to bend backwards in order to force upon its believers a questionable merciful deity. The gnostics believe that everything, from far-off stars to the nuclei of our cells carries the mark of the original imperfection inherent to the Creation. In the midst of this material darkness there is a spark of light, concieved by the original God, as a trace of our true being. The goal of a gnostic is to tear through the veil of delusion and burst through the screen of false reality into his original homeland, the otherworldly realm of the True God. 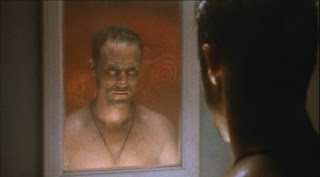 Stanley admitted this much about DUST DEVIL in an interview to Donato Totaro: ''It basically dispenses with conventional morality and tries to replace it with a totally different idea of movement toward the spirit or away from the spirit. The friction between matter and spirit, rather than good or evil is definitely outlining something similar to gnostic thought, although I wasn't that aware of gnosticism when I made the movie.'' 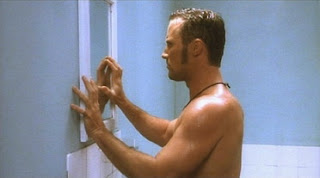 According to the mythology of this film, Dust Devil is not the Christian Devil, he is not even the top demon. He belongs to a legion of ancient beings, trapped in human form, roaming the secluded parts of the Earth in desperate attempts to get rid of the material shell. For the ritual to be successful, he must release as many sparks of life (or souls, if you wish) trapped in those who are already half-way out of this world. The desperate, the haunted, the suicidal are his food. Dust Devil is not a serial killer – he is a serial savior! 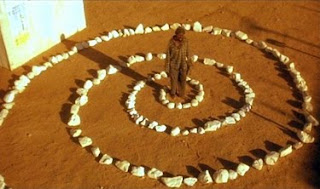 A black shaman describes him thus: ''He is of the spirit. We were put here just for his use. We're nothing to him. We're dust in the wind. His world is older than ours. He's been here since the first times, he and his kin, walking in our shadows. Leeches, growing fat on the world’s pain. He's smelt Bethany dying, and he's come for souls, to build his Power, to return to the Realm of the Spirit. Until this ritual is completed, he's trapped, like us, in a material world, bound by the flesh. He must work through human form ahile he’s in this world. So he’s vulnerable to human failings. Only through ritual, through gaining power over the flesh, can spirit awake to a fuller consciousness. To work the ritual, he must keep moving, moving.'' 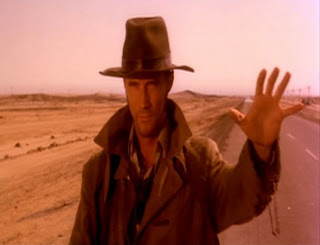 And this aspect adds another layer to the complex tale Stanley has concocted: his killer is a haunted, doomed figure too. His actions are predetermined. He is trapped just like his prey. In one brave scene Stanley shows him weak, crying next to a woman. In another, he's staring helplessly into the mirror, unable to cross to the Other side. He's in the claws of the Evil Demiurg as well. Only severing the bonds of spirit to the matter can bring him closer to salvation. 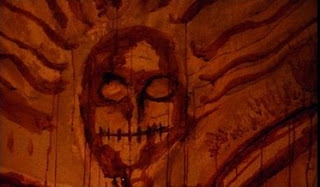 The Devil is, obviously, a figure that Stanley deeply sympathizes with, and he's presented in the film knowingly, with numerous allusions to the multifaceted archetype invoked. Stanley's Devil is a Stranger, an Alien, a Man with No Name. A Shape-shifter: bringer of instability, enemy of fixity. The Great Pretender, Actor, Liar, Fool, the Man with a thousand faces. Dweller of the Crossroads, gateways, bridges, crosses where worlds intertwine; Guardian of the Gate of Passage, the top Initiator. Inhabitant of the Desert, bringer of extremes, Avatar of emptiness and desolation – or transformation. He's the One from the mirror, the other side of reflection: the double, the doppelganger. Defined by the fire, heat, flaming red, shimmering of the hot air above the desert dust or asphalt, the deceiving fatamorgana. The Tempter, the Seducer, the Trader of souls. Carrier of the male energy, defined by the phallus and horns. The Defier. The Rebel. A haunted, roaming soul. A Damned One who feeds on the damned. Ambivalent shadow of 'Evil' through the centuries. Anti-hero, dissatisfied with the assigned role. Ultimately, a puppet whose strings are in the hands of the Evil Demiurg. 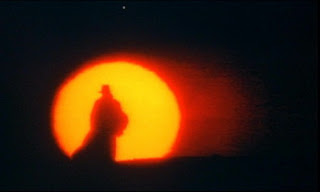 Namibian desert, the oldest in the world, becomes the most adequate stage for the primeval, timeless drama. South Africa is at the Edge of the World, both geographically and symbolically. That is the home of the Fish River, trickling through the world's second largest canyon, home of the great Snake Father, Kouteign Kouroo. According to the beliefs of local natives, the great Snake Father created the canyon with the lashings of his gigantic tail back in the ancient time of the red light. Stanley describes this place in his production diaries as ''a land that no longer seems to be part of man's universe, an untenanted, unfinished world, the terrain of Gods and Spirits''. This is the same location that Kubrick used for the opening segment ('Dawn of Man') of 2001: A SPACE ODYSSEY, and in Stanley's vision it is the stage for the 'Twilight of Man' as well. 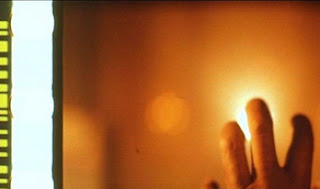 This is the edge of the abyss.

It's either destruction or transformation.

In this place even the Devil is not a metaphor or psychological concept but a very possible, even tangible reality: a roaming spirit at the beginning and end of the world.