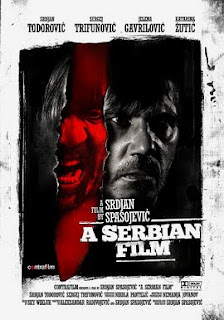 You don't need to be a rocket scientist to realize that A SERBIAN FILM is not exactly the kind of fare you want to see with your mom. What with the story of an ex-porn star accepting one last job so he can sustain his impoverished family in today's Serbia, and the uber-sick underworld he stumbles upon in which pornography, war criminals and State Security are linked in ways unimaginable, yet so logical. Our star chances upon the kind of movies that can only be made where human life is very cheap!

Photo: From the set - director Spasojevic (right) and star (Srdjan Todorovic, in the car)

First of all, A SERBIAN FILM puts to shame almost all recent attempts at nightmare inducing shocks, with only MARTYRS (and a somewhat bygone, but still unforgettable IRREVERSIBLE) as relatively solid reference points – not in terms of plot, but in terms of nerve-shattering effect on the viewer. This film will f*** your senses, it will rape your soul. Be prepared to see penis go where no penis has gone before. Be prepared to see new uses of Viagra for bulls. Be prepared to witness unprecedented levels of child abuse. And then some.

Second of all, this is a beautifully shot and edited film, with an excellent sense of timing and narrative economy and a superb industrial droning score by Sky Wikluh. Also, there are at least two incredibly memorable performances. One is by Srdjan Todorovic as Milos, the said ex-porn actor selling his sex tool for the last time. He simmers with quiet desperation through the first half of the film only to explode in a raging feat towards the end which will sear you like a wildfire until the very celluloid seems to be burning. The other is Sergey Trifunovic, as the shady Vukmir, insane producer and director, the puppet master of an "art" porn theater in which performers include a war-hero's widow and kids from a Home for abandoned and orphaned children. Although technically a villain, Vukmir is the one with all the best lines and the most thought-provoking monologues whose content may be as shocking to some as the imagery he shoots.

Third of all, none of this would matter if the film had shocks for shocks' sake, or if it were just another exercise in cinematic sadism. The horrors of A SERBIAN FILM actually have a point. There's an attitude and meaning behind it all. The film is firmly rooted in a feeling of frustration and despair of living in Serbia today. But, fear not: you need not know much about the recent history or the daily life or politics of this European country to be able to understand the frame of mind and the state of affairs behind the permeating sentiments of resignation, tiredness, despair, humiliation, cynicism, pessimism and the wish to leave all that behind. A SERBIAN FILM does not offer any false hope. Quite the opposite, it reinvents horror genre to suit its own purpose, finding in it the perfect vehicle to depict the feelings that life in Serbia evokes in its youth.

Mind you: this is not a documentary film, and the Serbia you'll see here is not the one you'll encounter if you ever come to this country. Instead of copy-pasting reality, A SERBIAN FILM transcends it and offers a stylized version of what it feels like to live in country humiliated, denigrated, impoverished, bombed-out, stripped of its territory, labeled genocidal and haunted by the spirits of war crimes both real and constructed. It is a country in which shady figures with strong political (and criminal) background still govern your life, where hope is hazy and dignity forgotten, where you are both metaphorically and literally f***ed.

In such a context, pornography and snuff are vivid metaphors for the raging Thanatos overpowering Eros, in a similar manner to another recent Serbian film, THE LIFE AND DEATH OF A PORN GANG (2009). Death drive governs the sex drive so much that even the pleasure-giving penis becomes a death-dealing weapon. And this metaphor is quite literal in this film, but without the mediating distance of splatstick humor of the Japanese Machine Girls or the Sci-Fi of mutating Tetsuos. You won't know whether to laugh, cry, stare in disbelief or leave the theater (provided your legs still obey your commands) at the transgressive new links between sex and death that A SERBIAN FILM reveals.

This review is intentionally vague about the plot details. You deserve to be as innocent and virginal as possible entering the film – before it rapes you like a bearded, ogrish war criminal.

A SERBIAN FILM should not be taken literally, like a "slice of life" depiction of today's Serbia. What it does is use strong and exaggerated metaphors to convey a certain feeling. If MARTYRS and IRREVERSIBLE, for example, portrayed sickening doings in France without making audiences believe it to be a nation of sick perverts and rapists, hopefully A SERBIAN FILM, in a similar manner, won't do much to hurt Serbia's already not too good public image. As the matter of fact, it plays upon certain expectations (and prejudices) associated with how this locale is perceived in the West, and can be understood as a grotesque parody of Serbia's current image in the eyes of foreigners. It seems to be saying: "You thought we were a nation of criminals and maniacs and ogres? You haven't seen anything yet!"

This is just one of the ways that A SERBIAN FILM implicates its audience into its cunning doings: it will involve you, whether you like it or not, and it will make you question not only your role as a spectator and voyeur of sexual and violent cinematic arousals, but will also shatter many other preconceptions you may bring with you to the film. It has a clever way of making you reconsider all that you hold dear. One thing is certain: it won't leave you indifferent. It will embrace you, seduce you and penetrate you before you know what's gotten you and once you start picking your jaw off the floor it will be too late.

Never again will you be able to hear or read the innocent phrase "a Serbian film" without a reflexive awakening of the searing images that Aleksandar Radivojevic (screenplay) and Srdjan Spasojevic (co-writer and director) have put on screen. For better or worse, A SERBIAN FILM will mark you for life like few other films have managed. It reinvents the somewhat forgotten art of real transgressive cinema and shows what real filmmaking can still accomplish.