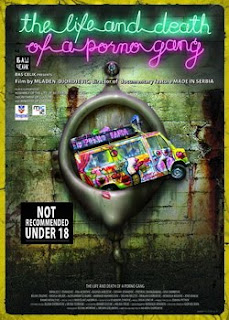 Written and directed by Mladen Djordjević

Instead of copying the foreign generic models, as Serbian horrors like T. T. Syndrome and Zone of the Dead have done, …Porn Gang hits so close to home that it hurts twice as much. Its real inspiration lies in the years of (post)Milosevic in which civil wars and violence of all kinds brough about failure of all ideals. The director, Mladen Djordjevic, grew up among images of slaughtered, decapitated people from the civil wars in Croatia and Bosnia, shown in prime time Serbian news. He takes a documentary form as a way of capturing a stylized, but still very authentic portrait of the complex ways that Eros and Thanatos are merged in today's Serbia.

The motif of snuff metaphorically reveals a strong death-wish present among the disenchanted, disillusioned people for whom death is the only salvation. Thus, Djordjevic presents a line-up of voluntary victims of snuff films: a touching, melancholy cast of the ruined and forgotten ones. Unlike the victims in American torture-porns with snuff motif, who are so full of life and courage to fight until their last gasp, the Serbian ones come to their executioners voluntarily, searching a means of sustaining their impoverished families or a quick escape from unbearable life.

Although the film had a very low budget, this only augments its documentary look. Thanks to the expert digital camera of Nemanja Jovanov, it reaches an authentic feel rarely seen since the days of the original The Texas Chainsaw Massacre (1974). Largely unknown young actors and nonprofessionals invest their characters with honesty and frankness. Unlike their "movie stars" colleagues, they are unafraid to bare all, both physically and emotionally, thus making this shocking and harrowing film at the same time also very engaging and emotional. In its sympathy for the outsiders, but also in its road-movie structure, …Porn Gang continues the tradition of the Serbian "Black Wave" of the 1960s, especially films by Zelimir Zilnik like Rani radovi (1969), but infuses it with modern influences, especially the films of Takashi Miike.

Its significance is well summed up in the catalogue of the Puchon film festival where it shocked and enthralled the audience: "As you see the enthusiastic youngsters dreaming of art and revolution being murdered, raped, and kidnapped one by one, you get to wonder if you're witnessing one of the biggest turning points, or cinematic landmarks, of the Serbian film history."