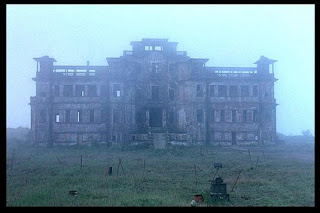 Story: A long-lost unit of Korean soldiers fighting in the Vietnam War dispatches a distress signal six months after everybody considered them dead. A squad of nine men is sent to investigate the situation, especially since the call came from a non-combat area. They come to the R-Point area, and in the midst of a vast field they discover a solitary mansion, empty and dilapidated. The area of a massive burial ground was considered sacred by the Vietnamese, and an inscription on the stone says that no one who’s got blood on their hands will leave the spot. But – they are soldiers; of course their hands are bloody. And that’s a good starting point for a lot of spooky, scary and gory goings-on… 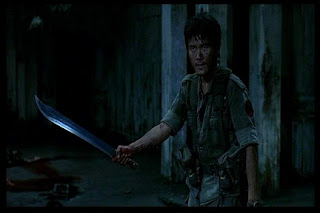 Review: War is horror. It’s a truism, I know, but it’s still a good starting point to discuss this particular scary flick, since it takes a real-life fact (Korean involvement in Vietnam) as the background for its fictional, supernatural horrors. Horror is a genre in which one can, if so inclined, deal with serious social, moral and even metaphysical issues in an unpretentious, unobtrusive way. The imagery at hand is at the same time visceral and universal enough so that widest ranges of people from different times and places can relate to the archetypal motifs of this genre. Still, surprisingly few horror films ever tried to use a real war as their background, and among those only one (JACOB’S LADDER) can be called excellent and one (DEATHWATCH) is very good. The rest are forgettable. 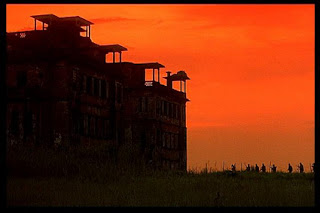 Where does R-POINT stand in this small sub-genre? In short, its potentials, together with the qualities of its first half, make it very close to JACOB, but its somewhat confusing second half brings it closer to DEATHWATCH. The result is a schizophrenic mixture of higher goals and not-so-special ultimate achievement. Pretty soon it becomes obvious that the film’s real interest does not lie with the characters (sketched, but never fully developed), drama (thin and existent only in traces) or ideas. For example: the leader of this unit, and the film’s protagonist, is notorious for having most of his previous units killed in action – yet nothing much is made of his personal demons, or anyone else’s for that matter. The idea of ‘having blood on one’s hands’ is left unexplored, like a cliché curse from some minor ‘thou-shalt-not-steal-from-the-mummy’s-tomb’ flick. This is sad, since one of the opening scenes, in which the soldiers destroy a sniper, only to find a Vietnamese girl behind the gun, is reminiscent of the FULL METAL JACKET’s climax. The emotional resonance of the horrors of war is very soon left behind, and more conventional horrors of supernatural kind become dominant. 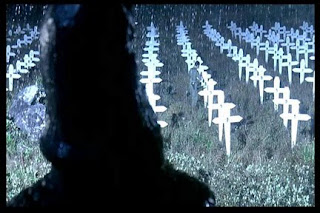 This, in itself, is not too bad. R-POINT would’ve been a whole lot better if at least it had exploited its spook potential to the maximum. This, however, is not the case. Which, is a pity, since the premise is good and original, the setting pretty much unexplored, and a lot of the scary sequences actually work. They are treated as witty and effective set-pieces: in isolation, they range from OK to very good and powerful ones. Nonetheless, they just don’t add up to any coherent and powerful whole. Too many good ideas are thrown in, glued together by plot holes and underdeveloped ‘mystery’. There is a difference between ‘subtle suggestion’ and ‘lazy plotting’, and I’m afraid R-POINT’s script can be blamed for the latter. R-Point of the title seems to be the site of some previous massacre: yet, we never learn anything about it, and the notion of concentrated mass of ghosts hungry for vengeance is never fully explored. 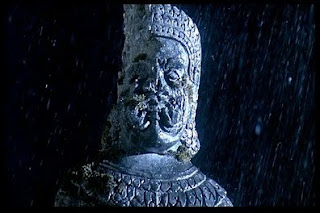 My heart is weeping at the wasted potential of this: just imagine dozens of ghosts rising and doing what they do best in such a fine set-up. Instead, we’re treated to a single, trite ‘long-black-haired-ghostgirl-in-white’ – and even she does not do much. She seems to be the guardian-ghost of the R-Point (she’s the same as the sniper girl shot in the beginning) – but if that is so, it’s not clear how come she was so material behind the gun, how come she was bleeding? There are also ghosts of American soldiers (used in one very nice scene - and then forgotten) and ghosts of French soldiers (used similarly), but none of them ever do much for the whole. Considering the amount of solid ideas and gimmicks, perhaps R-POINT would’ve worked better as a TV-series in which every episode is devoted to one particular kind of presence haunting the same premises but different units of soldiers. As it is, in a single film that R-POINT is, the ghosts, ideas, potentials, gimmicks and set-pieces are overcrowded to the point of standing in one another’s way and subtracting from the film instead of adding to it. 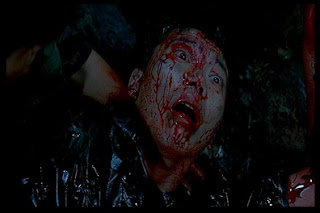 What works in the film is very, very good: the huge decayed mansion is a masterpiece of production design, and the same goes for the temple, graveyard, and even the spooky old radio. The photography is excellent and provides numerous powerful images and an unforgettable atmosphere (further enhanced by a very fine score and elaborate sound effects). Unfortunately, the script’s lack of ambition, together with its inconsistencies, bogs it down from a potentially great horror film to merely a solid, occasionally scary but ultimately empty and underwhelming one. 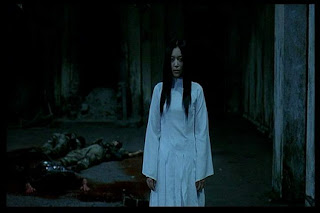 DVD [NTSC, Region 3] : The Korean limited double disc edition is a good example of elaborate promotion: fancy card slipcase contains replica of the R-Point map, several quality print movie-postcards, and a booklet with at least one excellent image that is NOT in the movie. Disc one of this edition contains the film itself and the audio commentary with the director, producer and chief of production department. Pity it’s in Korean, with no English subtitles – and the same goes for the entire supplemental material on the disc two: unless you speak Korean, you’ll be lost in the (otherwise excellent) animated menus. While roaming through those, you can come across Making-of featurette, various interviews –including the special-effects guy who explains some of the gore effects- trailers and the like. The dual layer disc presents the film in 1.85: 1 ratio, with an excellent, sharp image that only the greatest nitpick-fetishist can find faults in. The same goes for the sound, which rocks in Dolby Digital 2.0, D.D 5.1 and DTS 5.1. and will definitely creep you out if you dare to watch it alone in the middle of the night.