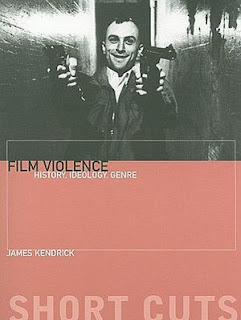 I already gave a recommendation for this book in the June issue of RUE MORGUE, but I think it deserves a more detailed review, so here's a longer, cyber-version.
FILM VIOLENCE is another in a long line of concise & condensed studies, or at least clever overviews, of significant film topics, themes and (sub)genres coming from Wallflower. It is number 45 in their ever-growing Short Cuts series. I've already covered some previous titles here, like FILM GENRE: From Iconography to Ideology by Barry Keith Grant. 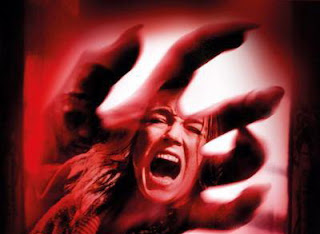 The book is divided into four chapters. Part one deals with "What do we mean by 'film violence'?" and maps the complexity of the problem. First and foremost, Mr. Kendrick presents the topic as crucial to understanding cinema itself, since violence in all its guises is inherent to the flickering, "moving" image (violence on the technological level: light piercing the eyeball and deluding the brain with a deception of life). More obviously, it is linked to the necessity for drama and conflict in what is basically narrative art. Furthermore, "understanding film violence is central to understanding the social and historical role of the cinema" (p. 4). 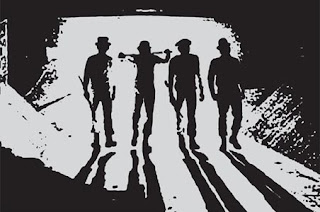 The author endeavors (and succeeds) in his attempt to provide a general foundation for understanding film violence from historical, ideological and generic perspectives, which entails looking at how film violence has affected and been affected by governmental policies, box-office receipts, gender difference, shifting notions of genre, well-known auteurs, changes in narrative and broad social trends. Violence, for Mr. Kendrick, is a "complex signifier" and he consistently refuses monolithic definitions, preferring its presentation as a complex mode of signification that needs to be thoroughly grounded in historical, cultural and industrial contexts as well as subjective experience. 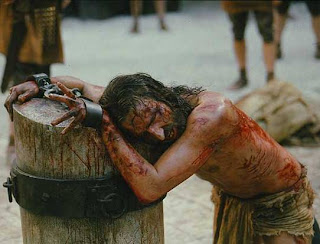 Chapter two traces the depiction of film violence from the silent era until the present day, focusing on aesthetic innovations (special effects, slow motion etc) and various social responses to it. As the author puts it, "people have been shooting and stabbing and slaughtering each other onscreen since the movies began, and the only difference between then and now is that filmmakers have adopted and made conventional increasingly graphic means of depicting these violent behaviors" (p. 14). The crucial shift comes in the 1960s, when explicit cinematic violence ventured from the disreputable grindhouse B-movies into the respectable mainstream – first in Europe and Japan (esp. samurai films), then in the USA, too (largely thanks to Hitchcock's PSYCHO and BIRDS). 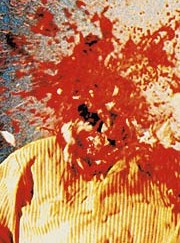 Chapter three focuses on how violence was used in several of Hollywood's most popular genres (western, horror and action). Representation of violence in these genres is connected to their ideological functions and their changes over time. Horror is dealt with in about 10 pages, with special stress put on concepts of taboo, monstrosity and transgression (thematic, ideological and visual).
Mr. Kendrick's brief analysis of Paul Morrissey's Flesh for Frankenstein (1973) is rather unconvincing and problematic: this film is labeled "reactionary" because it offers "a sharp critique of excess in any form, particularly meaningless sexual excess" (p. 87). So it would seem, according to Mr. Kendrick, that "meaningless sexual excess" should, actually, be presented as progressive? Morrissey's film is called "conservative" because of its ironic stance towards the sexual revolution of its time. This is reminiscent of Robin Wood's famous misunderstanding of Cronenberg's early horror films, criticized for being against the "liberal" party line according to which meaningless sexual excess was progressive and deserved all the praise. This is surprisingly narrow-minded in an otherwise quite decent overview of the role of violence in horror film and various theoretical approaches attendant to it. 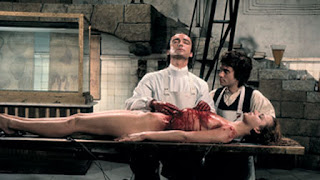 Finally, chapter four offers a case study of the central role of violence in the films of directors of the New American Cinema in the 1970s, also known as The Film-School Generation (F. F. Coppola, Martin Scorcese, Paul Schrader, Brian de Palma...) and shows how they have reworked classical representations of violence to distinguish themselves from the previous generations of filmmakers. With this chapter the book ends somewhat abruptly, without conclusion of any kind. Instead, there are helpful items like selected Filmography, Bibliography and Index. 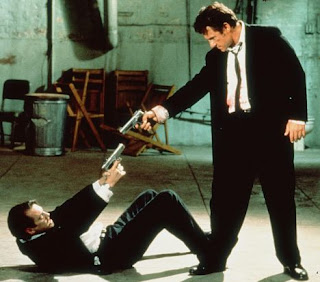 FILM VIOLENCE: History, Ideology, Genre is a scholarly text, but it is clear and highly readable for those who are not film students. Its arguments are well supported with a wide selection of quotes from relevant studies on the subject so that it provides a rich overview of the variety of implications that film violence can have. As such, it is vastly informative and educational, insightful and revelatory to all readers interested in one of the essential cinematic traits, fundamental for understanding cinema itself.
Објавио Dejan Ognjanovic у 18:30